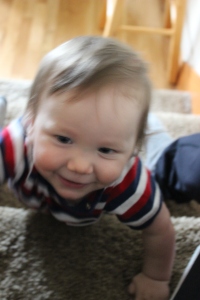 It was probably just about a year ago–when Cadel was still but a growing mystery inside me–that a coworker told me about a one-year-old birthday party she had been to.  She mentioned specifically the cupcakes that were served, and the frosting and cake crumbs smeared all over the faces of the twelve-month-old party-goers as well as the toddler of honor, of course.  Mom-to-be that I was, I was horrified:  what kind of irresponsible, careless parent would serve her pure-as-fresh-snow baby such a sugar-laden, nutritionally vacuous food as a cupcake??  Not me, I thought to myself, rubbing my basketball belly and giving my head a small, self-righteous shake.  I secretly vowed never to commit such an offense once I was a parent.

Fast-forward one year, and my healthy and innocent 10-month-old has already had a taste of chocolate brownie (at our “pre-school” class to celebrate the birthday of a classmate), pumpkin bread (made by me), and then these: 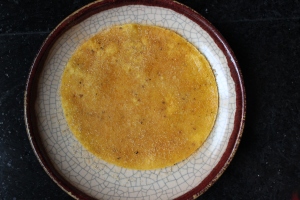 I’m calling them baby elephant ears not just because I’ve served them to Cadel but because they are petite in comparison to the mammoth swaths of fried dough you either love or hate to find at carnivals.  These are better, and more wholesome, I’m pretty sure.

I hadn’t intended to feed Cadel elephant ears, but here’s how it happened:

I had a lot of white corn tortillas in the fridge leftover from a fish taco dinner, and in a desperate move to create a little lunchtime dessert where there was none, I fried up one and tossed it with cinnamon sugar while Cadel was eating his lunch.  In an instant, the baby elephant ear was born.  I hungrily bit into it while standing over the kitchen sink–I somehow can’t seem to just sit down for meals lately–when I noticed Cadel watching me from his booster seat at the table, where he was finishing his lunch of turkey, avocado, and cheese.  His chubby little legs wiggled and he breathed quickly in and out, as he does when he gets excited about something new.  He was eyeing my elephant ear.  I sighed, walked over, sat down at the table with him, and broke off a piece of the tortilla for him.  We shared the baby elephant ear between us, happily munching away until it was gone.

It’s a very satisfying mix of earthy masa flavor and heady cinnamon sweetness.  My kind of not-too-sweet dessert.  And sitting there for those few moments with Cadel, I was surprised by a distant memory that came to me like a vision:  my mom making cinnamon toast for the three of us kids on the weekends when we were small.  She would make them two-by-two as they came out of the toaster, spreading the slices with butter and then sprinkling them generously with her cinnamon sugar mix, which she kept in an old spice jar, while the next two were getting ready to pop up from toaster for their turn.  She would stack them up high on a plate and put them out for us to devour, warm and sweet, leaving us with sticky, sandy, lickable fingers.  Though her face would never show it, I am sure that some mornings she was tired when she made that toast for us, and maybe she ate her share standing over the kitchen sink while washing the plates and cleaning up.  I never noticed then, but I think of it often now, the daily, unspoken work of a mother for her children.

So my baby has had sugar, months before his first birthday even!, but this small nutritional aberration was steeped in memory and we shared it.  So I was reminded that we are fed in more ways than one.

Anne Lamott says in her witty and very smart book on writing, Bird by Bird:  “Perfectionism is the voice of the oppressor.”  I think this is solid advice whether you are a writer, a mother, or neither; in fact, I am considering having the phrase made into a fridge magnet for myself.  It helps me when all my finely laid plans and inflated expectations get knocked to the ground like a tower of wooden toy blocks, when that voice of perfectionsim threatens to keep me from feeding myself where I am truly hungry.

Make cinnamon sugar: mix together one tablespoon of ground cinnamon with 1/4 cup of organic granulated sugar. Store in a jar with a perforated lid for sprinkling.
Melt about a tablespoon of butter or coconut oil in a skillet (I like to use cast iron). When melted and hot, add one tortilla and fry for about 20-30 seconds**. Flip over. Sprinkle with cinnamon sugar. Continue to cook for about  20-30 seconds. Flip out onto plate and sprinkle the bare side liberally with cinnamon sugar.  Eat with abandon.

*Thick, “handmade” style work best and will be easier for little mouths to eat. Thin tortillas may be too leathery and crisp for those without many teeth.
**Use the longer fry time to make a crispy ear. But if you are sharing with a baby, you will want to keep it soft.

napping with the Blue Ox. This one’s for you, Joan!