It has come to my attention that some unnameable force of nature conspires against parents to topple even their most carefully laid and dearly held plans like a tower of teetering, toddler-stacked blocks; which is to say that a parent like myself often has a very hard time doing what she set out to do. This is a fact of parental life that no one tells you about beforehand. (If you don’t have children yet and didn’t already know this, either stop reading now and forget I mentioned it, or read on and take note).  Consider the following case in point:
Our mail carrier used to come by our house at 11am everyday. We have one of those old mail boxes that is attached to the house right next to the front door. It just so happened that this was also the time when Cadel took his morning nap. And inevitably, each time the mail carrier approaches our house, Will, ever the trusty guard dog, barks at her, thereby throwing a nasty wrench in our nap time routine. But nothing stays the same for too long, and Cadel has gradually moved his nap from 11 to 11:30, then to the noon hour and finally to around 1pm, our now-usual time. Yet strangely enough, our mail carrier has inexplicably continued to come just as I’m trying to put Cadel down. His sweet eyes will have just peacefully shut and I’ll be gingerly backing away from the crib and out of his room, the sweet taste of quiet time just barely on my lips…when, sure enough, the tap of the mail box closing and then, “RUFF RUFF RUFF RUFF!!!!” Will let’s that mail carrier know in no uncertain terms that she’d best back away from our house, and pronto. He continues to bark until she’s completely off of our property and on to the neighbor’s.  Nap interrupted, again.. Alas.

There was a time in my life when it was sufficient to simply make plans. I made arrangements and then they came to pass, just as I planned. Perhaps you’ve experienced this as well, even felt it was normal for things to happen this way.  But now, what I took for granted as a normal function of life seems to me a dazzling jewel in the crown of life B.C. (Before Children). Now, my Plan A’s rarely work out and it is not sufficient to have just a Plan B up my sleeve either. No, if I really want to do something, a Plan C is in order, and even then, it may be plan D–that unexpected, off-the-cuff modification–that eventually works.

So it was that the other day, while Cadel played at the neighbor’s, I did something unexpected, something I could never have imagined myself doing:  I put on a workout video.  I’m a little embarassed to admit it, but there you have it.  I had downloaded it on my computer, from a certain Lindsey Brin of moms-into-fitness fame. And I was sure it was going to be really lame.  First of all, as I’ve mentioned, it was a workout video,  and something about exercising in front of a screen feels just plain wrong to me. Secondly, it was specifically a mom workout video. So how good could it possibly be. right? Nevertheless, it had come to me for free and I was somewhat desperate.
You see, I recently joined a gym not far from our house that has a “Kids’ Club,” where you can drop your little darling off while you go spin or zumba or otherwise get your heart pumping. But a month and a half into my membership, the only exercise I’d gotten was carrying Cadel up the three flights of stairs from the parking garage to the gym entrance.  Turns out he didn’t much like the Kids’ Club, and his dislike ran a little too deep for me to be able to get a workout–the Club staff come and get you if your child is wailing uncontrollably.  I’ve also fantasized about going regularly to a yoga studio but haven’t made it more than once or twice in the past few months.  And my attempts at running with the Bob stroller, Cadel inside and Will as my sidekick, have not gone as well as I’d hoped, and I haven’t been able to create a routine around the run.

So, like I said, I put on this workout video–led by two moms, one a mother of three and the other a mother of six (yes, that’s right: SIX)–and it kicked my ass.  For free even!  (Who needs a gym?)

It was good lesson in humility for my thighs, and my unfair assumptions.  To my immense surprise, I found myself immediately looking forward to the next opportunity to put on the video.  I even liked the corny way Lindsey Brin says at the end, “You got your cardio and your toning in, and you did it all in under 40 minutes.”  Oh yeah.  (fist pump)

Plan D is opening up new horizons for me all the time.  In the trenches of motherhood, I’m getting my butt kicked a lot, but in the very best way.  Slowly, slowly–but as surely as your baby will wake up just as you’re trying to finish your blog post, or your book, or your cup of coffee, or whatever it is you’ve been wanting to do–I’m getting over my old self and finding a new person on the other side, one humbling experience at a time. 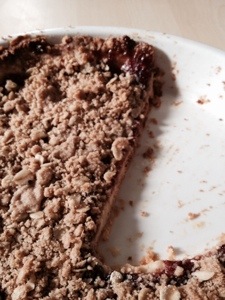 To make the crust, whisk together the flour, salt, baking powder, and sugar in a bowl. Rub the butter in with your fingers or pastry blender until a coarse meal forms. Add the egg and milk or cream and stir gently under the dough comes together. With floured fingers, pat it into a 9 or 10-inch pie or tart pan. Refrigerate for 30 minutes.
Preheat the oven to 375F. Line the crust with parchment and fill with pie weights, then bake until the edges are turning golden brown, about 15 minutes. Remove pie weights and continue to bake for about 5 minutes more.
Cool slightly. Reduce oven temperature to 350F.
Meanwhile, make the streusel topping by combining all of the ingredients in a bowl and rubbing the butter in with your fingers until a clumpy streusel forms.
Spread the jam in the bottom of the tart and sprinkle with the streusel. Bake again until the streusel is golden brown, about 15 minutes. 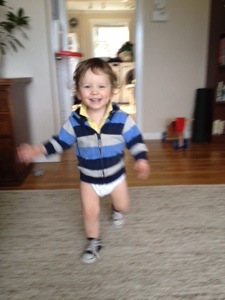